“My name is Fred. I’m from Colorado, but I work in Dallas. I contacted HEALTHWave Physicians Institute in Dallas in the middle of October, after I started experiencing significant ED issues following prostate cancer CyberKnife treatment. I had gone from being sexually active to not being able to get an erection at all, and I went through the first 3 treatments of the HealthWave. But, part of my prostate cancer treatment was a testosterone blocker and that drove my testosterone down so we delayed the second 3 treatments until after my testosterone level started to come back up again in January. I have now completed 6 treatments with HEALTHWave Physicians Institute, and I would have to say that my sexual abilities are, in some respects, even better than they were before I sought treatment here and, if nothing else, have returned to normal.”

“My name is Phil and I want to acknowledge the fact that the GAINSWave has benefitted me substantially.  It is a dream come true. I never realized that these machines were in existence, however, they do help.  I would recommend this to anyone who is having any sort of problems sexually.  As far as I am concerned, it has been a God send to me, and I do appreciate all the courtesy and the personnel at HEALTHWave.”

“I volunteered to do this because I wanted people to know just how well this treatment works, and it’s really exciting. This is coming from the heart and from my penis to be exact. I heard about this from a friend that found the doctor here, which I truly just love this guy. I mean, he is very caring and this is a very neat organization. I highly recommend them.

To keep it focused on what I have experienced, it’s from the first treatment to the last of the six treatments- I noticed a difference every time. I noticed I woke up with erections; I had more sensitivity in my penis; it’s more youthful. It was a lot of little bitty changes, little subtle changes that are showing you that something’s working. They told me it’d be a month after your last treatment when you REALLY know the difference and I’m here to tell you that I had sex like I thought I never would ever have sex again in my life. And my penis, I swear it grew. And I am totally in awe of that. This treatment is fantastic. It just really is fantastic.”

“I would strongly suggest this treatment for anyone suffering with ED symptoms.  I was a little skeptical in the beginning; I was desperate.  The process didn’t seem to work the first couple of treatments because it’s not an instant fix but by the time I had the 6th treatment, all my issues have completely gone away and a very happy wife at home and I’m not having any struggle to get or maintain an erection.  I would suggest this to anyone who’s on the fence about taking pills and doesn’t want to go that route.  This has been a very good option for me.”

“I was diagnosed with prostate cancer and subsequently underwent both surgery and radiation.  As a board-certified family physician, I fully understood both the risks and possible consequences of these procedures.  And although I am extremely grateful to consider myself a cancer survivor,  I was very disappointed in the fact that I became completely impotent as a result.  Then a friend with a similar problem referred me to the Healthwave Physicians Institute, and I could not be more pleased with this unique form of ultrasound therapy.  This treatment regimen has proven to be so incredibly beneficial in restoring feeling, function, and virility.  I HIGHLY RECOMMEND this group and their treatment for anyone with erectile dysfunction issues not only due to surgery and/or radiation,  but also for the treatment of impotence due to a separate medical condition or simply due to our mature age.”

“…46 and just decided to improve myself, my performance. I decided to go ahead and give this a whirl. I noticed a pretty big difference, just kind of used it to get ahead of the game so I would definitely recommend it to friends that want to kind of get a tune up.”

“I signed up for HealthWave because I am a 56 year old man with severe erectile dysfunction.  Because of this condition, I was mildly depressed, insecure in my marriage and feeling less of a man. Through internet research, my husband found this therapy option and after meeting with the doctor, I was onboard.  I have found that after the six sessions, I feel much better emotionally and sexually.  The treatment has really worked to the point whereby I have reduced the milligrams of Viagra I take for intercourse from 100 mg per use to 20 mg.  In addition, the staff was very professional and made this experience worth it for me.  I am happier and my spouse is happier and I really recommend this for anyone who can afford the treatment and who wants to see a difference.”

“When things aren’t working like they used to, it can really affect both partners. It can be heartbreaking. I suggested my fiancé try the HEALTHWave treatment – we’re in our mid 30s and we didn’t want to deal with side effects that other ED options had… The results have been incredible… It really helped our relationship get back on track. I recommend this treatment for any couple that is dealing with these issues. It’s the best money we’ve ever spent.”

“I started coming in for treatments because of unsuccessful sexual encounters.  I had 1 treatment on a Monday, another treatment on a Friday, went out of town on vacation and, after only 2 treatments, had four successful sexual encounters which hadn’t happened in a very long time.  I don’t know that it was necessary but the addition of an oral Cialis on top of that just intensified the activities.  I’m on what will be my 5th treatment and sexual encounters are as good or better than when I was 18…25 years old and I would recommend this for anyone really of any age, but especially us guys that are over 40.  I think even if you’re not having any difficulties, this can make things better.”

“I’m 36 years old, and in the last year I have not been performing like I did in my 20s, and really wanted a boost! And I got it! The procedure is painless, and within a few hours I was ready to go… and I’ve been ready every day since. I have noticed a significant difference in my “hang down”, which makes me happy and confident, and have an easier time getting intimate with my partner… I have enjoed the endurance that I now exhibit, and being able to maintain myself for longer periods. Couldn’t recommend the treatment enough. We’re both very satisfied!”

“My name is Gary and I’m a 64-year-old male.  I started the HEALTHWave treatments about 10 weeks ago.  I read about it through the internet and in recent years I had noticed that I was starting to have a little more trouble with erections and not staying erect during intercourse and not being able to last very long so I thought I’d give it a try.  After 10 weeks, there has been a noticeable difference in both stamina, the hardness of the erection, and the girth of the penis.  I look forward to seeing continued improved results and would recommend anyone that thinks that age is going to slow them down, to give it a try. “

“I would say that probably after the third treatment, I noticed that the intensity of the erection, which is probably due to increased blood flow would make it feel so hard. It felt like it was going to pop out of the skin. It doesn’t relate necessarily to my issue I think, I wanted sustainability, which probably could be somewhat psychological, but the intensity of the erection has been drastically improved I would say to the point at which I was a teenager and you’d wake up in the morning and had to go to the restroom, because you knew something was about to pop. It’s been a great help…”

“Well when I first came in – major performance issues and erectile dysfunction due to the Peyronie’s disease and – as far as I would consider age, blood flow, whatever.  Since my treatments and this being my last treatment and everything, it has – girth on my erections.  I have been – it is larger than it ever has been in my life.  Before I started treatment, even with an erection, I would still have loose skin on the erection.  There is no loose skin anymore on an erection.  The erections are full now.  The Peyronie’s disease has been, in my opinion, completely cured.  I don’t have any problems with that anymore, and the performance issues have dissipated also.”

*Written testimonials are of real HEALTHWave patients. However, they may not reflect the typical patient’s experience and are not intended to represent or guarantee that anyone will achieve the same or similar results. Our testimonials are meant to highlight the best results our treatment has produced. Individual results may vary, based on your age and medical history. Curious how Adult performer Ronald Stevens feels about the GAINSWave®? Here are a some highlights: 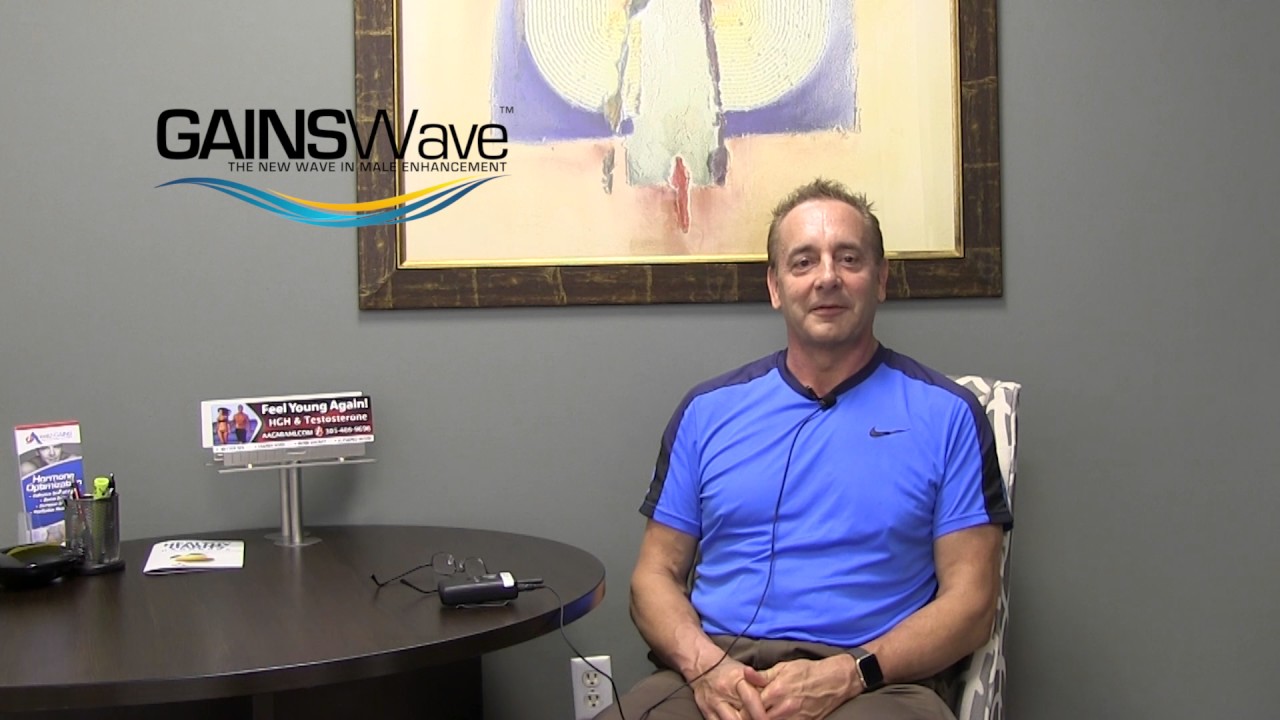 At 63, Karl had difficulty maintaining erections. After receiving the GAINSWave® Procedure, he now can maintain his erections, has greater sensitivity, and even credits it to a half inch in extension of his penis when having an erection. 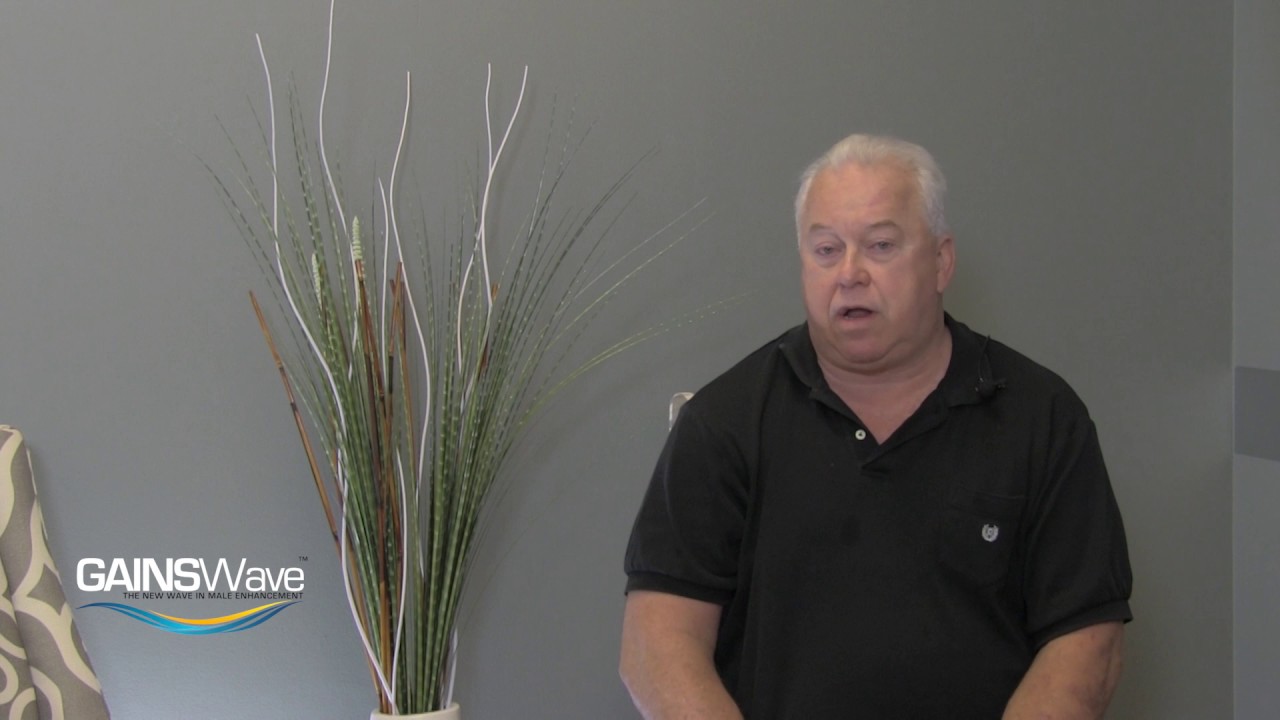 Jeff is one of the thousands of men that has had a new lease on life since using this revolutionary treatment. After Viagra and Cialis failed him, he now has sex like he did in his 20s!

Allen’s main complaint was a loss of sensitivity- something that got in the way of his intimacy with his wife. After GAINSWave®, he experienced increased sensitivity and significant size difference. He wants you to know that GAINSWave® is “Life changing” and he “Highly recommends it!”

*Video testimonials are of real GAINSWave patients. However, they may not reflect the typical patient’s experience and are not intended to represent or guarantee that anyone will achieve the same or similar results. Our testimonials are meant to highlight the best results our treatment has produced. Individual results may vary, based on your age and medical history.

Read this incredible review by Men’s Health about the GAINSWave®…

You won’t be disappointed…